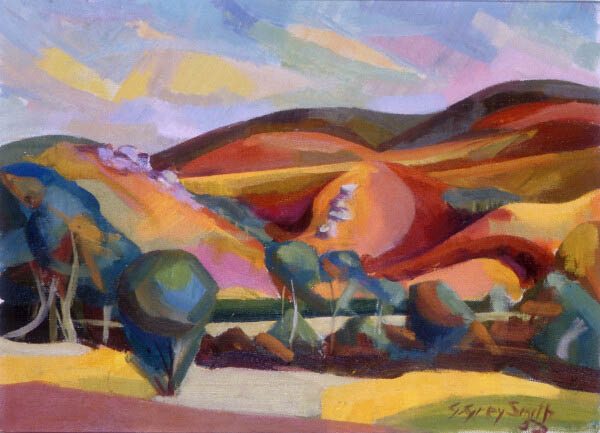 Guy Grey-Smith returned home to Western Australia in the late 1940s, after World War Two. With his wife Helen, he built a home and studio on a laterite ridge on the Darling Scarp above the Perth coastal plain, and set about forging a life as an artist.

This work arises from the early years of Guy’s dedication to painting the Western Australian landscape. It is an utterly joyous surge of colour: bright, fluid, vivacious, sensuous, and full of emotion.

Responding to Guy’s first solo exhibition the previous year, reviewer Charles Hamilton had written of the artist’s love of colour, praising his ‘original attack’. The critic also acknowledged that some people may be disconcerted to see their familiar landscapes rendered in such unfamiliar hues:

To the artist, our scenery brims with colour which vibrates, glows and reflects itself in many ways. Not many people see it like this. Not all will appreciate his way of looking at it.[1]

Guy Grey-Smith later spoke of the ways he perceived a landscape or a figure, and how the emotional power of those perceptions was manifest in his work: