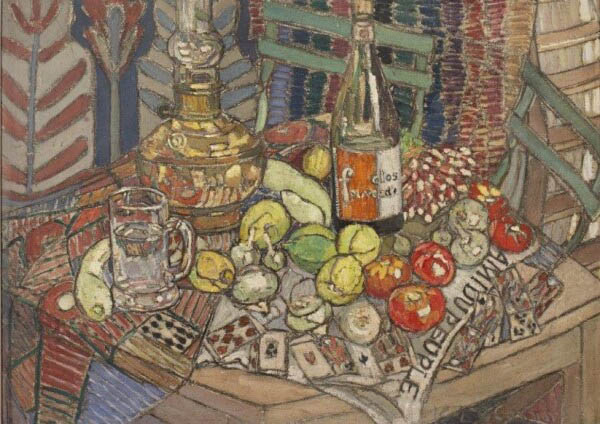 The interplay between decorative arts and fine arts is vibrantly present in this bustle of colour and tumble of objects. In the bold age of the 1920s, fabrics, furnishing, and objet d’arts were patterned with motifs often abstracted from natural forms, and there was a daring vitality to the embrace of colour. Women, empowered in the domains of the personal and the fashionable, were important players in the nexus between domestic design and the modernist principles of painting. Kathleen O’Connor was one such woman.

Having left Western Australia in 1906, O’Connor spent much of her life in Paris. During the 1920s, she worked as a freelance designer, with the luxury department store Galeries Lafayette among her Parisian clients. On a trip back to Australia in 1927, she took commissions from David Jones and Grace Brothers. O’Connor designed and painted textiles and wallpapers, created window displays, and decorated domestic objects. Meanwhile, in her painting practice, she turned to the still life. Those two strands of her career in the 1920s combine in this major work, which is one of the treasures of the Wesfarmers Collection.

This scene in the artist’s flat in Montparnasse has the intimacy of a close-up, as the top of the lamp disappears out of the frame and the eye is drawn down to the little table and the objects on its surface. The table tilts precariously in the flattened picture plane, and the commotion of intersecting lines – chairs, stair, table edge, fabrics – gives the image a brilliant exuberance. O’Connor’s own fabric designs are draped behind and across the table, creating a geometric background for the organic shapes of the fruit and vegetables. The strokes of colour in the fabrics are flatly applied in earthy, autumnal tones that recall the North African textiles influential in French fashion of the day. Adding texture to the surface of the picture, thick patches of white and yellow paint give a sheen to the red tomatoes and make the brass lamp gleam with reflected light and facets of colour.

Playing cards are strewn on the table, and buried amongst it all is a newspaper. Launched in 1928, and carrying the same title as Jean-Paul Marat’s journal of the French Revolution, L’Ami du peuple was a far-right populist paper with a huge circulation. Its art critic, Camille Mauclair, featured prominently. Mauclair was a virulent anti-modernist who lamented the depredations of foreign influence on French art, and later became a champion of Hitler’s campaign against ‘degenerate art’.[1] In this still life, the newspaper may be simply a prop among many, but its presence on the table does reinforce a rich sense of time and place. This is Paris between the wars.

Painted in tempera and oil on board, with black outlines clearly visible, O’Connor’s Still life with lamp is grounded in drawing, driven by design, and clearly aligned with the artist’s applied arts practice. It is interesting to contrast its graphic quality with the impressionistic fluidity of her later work, including Still life 1933-34, also in the Wesfarmers Collection.