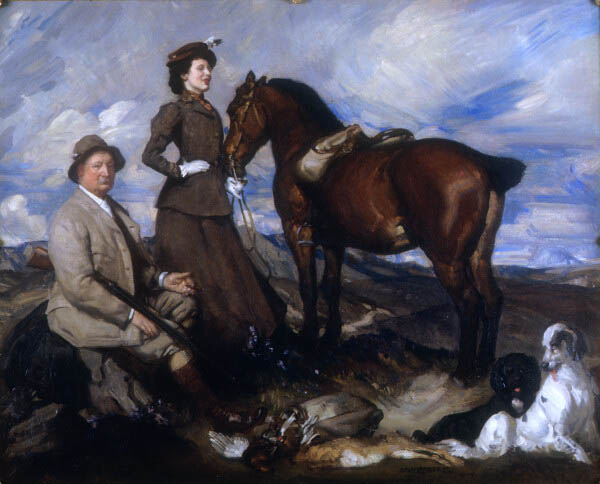 lived and worked in London and Sydney

This country image of a man, woman, animals and shot game was first exhibited at the Royal Academy in 1909 as Mearbeck Moor, Yorkshire. It was commissioned by the seated man, John Proctor, with the spoils of the hunt at his feet, his gun resting against his knee, his dogs lying exhausted. Beside him stands his niece. Yet Lambert constructed the image so it told another story as well: that of the emerging role of women at that time. He showed Miss Alison Preston as a woman in her own right; he placed her standing at the apex of the composition, wearing a modern riding habit and confidently holding the reins of the horse. By showing Proctor in hunting dress as if he were a sporting gentleman on a country estate, Lambert created a deliberate artifice. John Proctor was, in fact, not a member of the landed gentry in north Yorkshire but a barrister in London. We do not know whether there was any association with the village of Mearbeck.

Contemporary critics approved of this work, and observed that Lambert had achieved a sense of cohesion in the painting. In 1920 J.S. MacDonald suggested that this was the first painting which gave him a substantial 'lift' in Britain, and that it brought him many other commissions. He added that Lambert wryly declared that 'what really convinced the English picture buyer as to his painting capabilities, was the rendering correctly of the double barrel of his sporting patron's shot gun' (MacDonald, p.12). Laurence Housman noted in the Manchester Guardian on 1 May 1909 that 'the most interesting portraits of the year are, once more, the groups and single figures of private people, which under the Furse influence, have found an open air setting on moorland or hill', and placed Lambert's work among these.