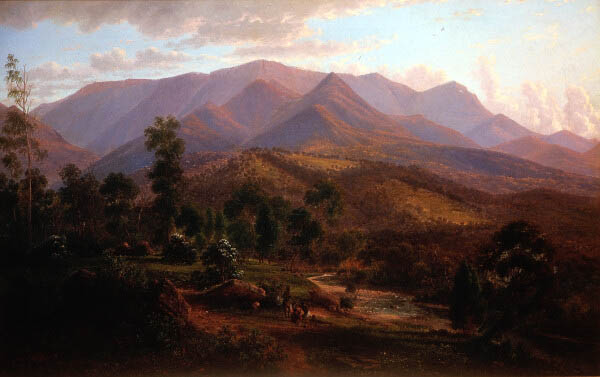 A view of the Snowy Bluff on the Wonnangatta River, Gippsland Alps, Victoria

Arrived in Australia in 1852

A view of the Snowy Bluff on the Wonnangatta River, Gippsland Alps, Victoria 1864

In December 1860 Eugene von GuÃ©rard journeyed to Gippsland with the explorer Alfred Howitt. As a result of sketches he made on this journey, two near-identical versions of this view at the junction of the Wonnangatta and Crooked River were painted in 1864.

Von GuÃ©rard's world view was steeped in European romanticism, particularly the German romantic tradition of Caspar David Friedrich. Nature contained spiritual as well as material truths, natural forms were therefore studied with great assiduity. Von GuÃ©rard's topographical excellence goes hand in hand with his formidable sense of the structure of forms. Impeccable surface detail is matched by an architectonic grasp of the substance and density of land masses.

His fine brushwork is rigorously precise, and overall his romanticism locates the spiritual within the material with a subtlety akin to Friedrich. The aborigines gather in a bush clearing by a mountain river. Native plants are in bloom and the arcadian peace and plenty in the foreground is backed by mountain splendour which suggests a real harmony where man is seen as an integral part of nature.

Historian Bill Gammage has identified that areas of tree clearance which can be seen on the hills in the middle-ground of this painting document indigenous land clearing practices associated with traditional hunting practises.