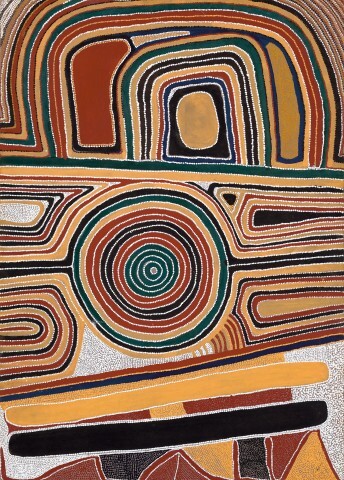 Surrounded by the plains of the Tanami and Great Sandy Deserts and located at the intersection of major Dreaming tracks linking the Western Desert and the Kimberley regions, Wirrimanu (Balgo Hills) in Western Australia is a place of great religious significance and the ceremonial hub for several Indigenous clans. This importance as a religious place was heightened when a Catholic Pallottine Mission was established there in 1939. The uniqueness of the community is in part a result of the diversity of its members. Culturally varied, the traditions of seven language groups have resulted in a social and creative pluralism unlike any other desert location, with the exception perhaps of Papunya in the early 1970s.

Murtiyarru Sunfly Tjampitjin belongs to the first generation of male artists to emerge from the ex-mission settlement, and it was from this extraordinary meld that the first decade (from 1981 - 1992) of the Balgo painting movement arose, in part heralded by the land rights movement of the previous decade.1 The landmark 1986 – 87 exhibition, Art from the Great Sandy Desert, at the Art Gallery of Western Australia, resulted in the art from Balgo being recognised as a distinct body of work, functioning as documents which asserted their custodianship of major ceremonies and tracts of land. The 'genius of Wirrimanu art emerged in all its bold opulence: a broad calligraphic style combined with linear techniques of dotting and lush surfaces, together evoking depths of land and being... Often appearing more as a collection of individual or family renditions of Tjurkurpa (Dreaming) and sites, Wirrimanu's 'style' is one of conjunction, experimentation and expressiveness.'2

It was in this context that the work of Sunfly Tjampitjin flourished. Developing a complex language for the translation of traditional designs onto canvas, he was considered one of the region's major contemporary artists. Bold in form, his paintings have a sense of the monumental in scale, even though the dimensions of a work may not be large. These forms dominate the picture plane and convey notions of faith and authority.

The Artist's Country, 1989 portrays an episode of the Wati Kutjarra Tjukurpa, or Two Men dreaming, a significant story that underpins the ritual education in the transformation of boys into men. In their ancestral journey, the Two Men travelled over a large expanse of desert country including that of the Warlpiri, Pintupi, Kukatja, Walmajarri and Ngardi peoples. On their travels, the two men moved in and out of the ground at various places, creating natural phenomena, drinking from rockholes and soakages and leaving traces of their presence in the landforms. The artist's outstation at Yagga Yagga, located 80 kilometres south of Balgo in the Great Sandy Desert, is the site of a major sequence of this story and this episode is centred around Yagga Yagga. It was here that the two men camped (depicted at the top of the painting) and slept (featured centre right). Also illustrated at the bottom of the work are two powerful and secret Tingari men who were passing through on their way to other places.

A senior law man who was responsible for the Tingari ritual ceremonies, Sunfly's work is timeless in its minimalist perfection; measured and restrained, it imparts an unfailing atmosphere of authority.