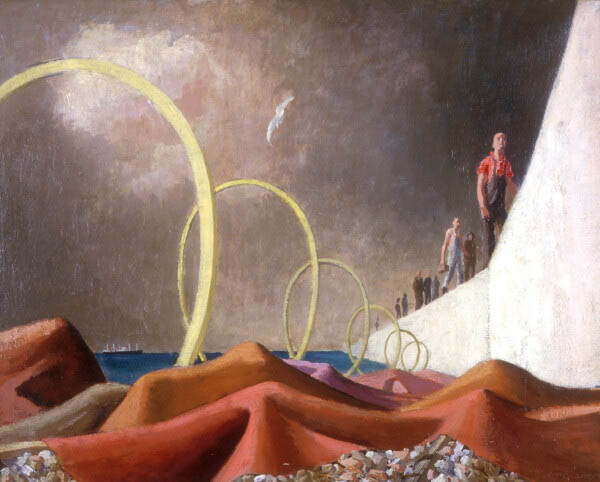 Smart's work retained a singleness of purpose throughout his career, his subject matter, style and formal concerns consistent from the 1940s to the 1980s. His groups of ordinary people in unreal and oppressive urban surroundings can be viewed as studies in modern alienation.

These workers are trudging to work at Kurnell, an industrial zone near Botany Bay, Sydney, which includes sandmines and oil refineries.

Though his paintings are apparently realistic, their individual parts are assembled from different sources. His pleasure in juxtaposing the dark, despondent and realistically painted people with the bizarre yellow shapes on the beach reflects his persistent taste for the surreal.

Smart's very early works were surrealistic fantasy scenes which showed an interest in TS Eliot. By the 1950s he was painting against the tide. His work became more and more controlled as abstract expressionism swept into vogue.

Kurnell 1955 falls between the works of the 1940s and his crisper, brighter and apparently less emotive work from the 1960s onwards. Thicker paint, visible brush strokes, muted colours and a sense of angst, show his roots in the Melbourne expressionism of Boyd, Tucker and Perceval.