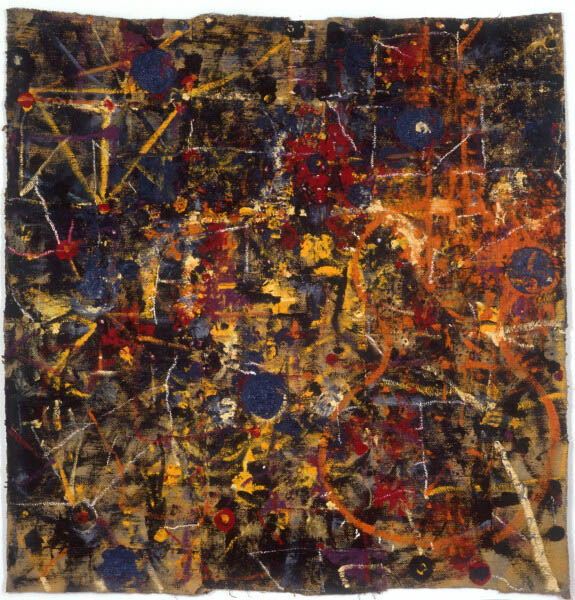 'My paintings are at the end of the visible world, close to nothing, which is where I am. They are membranes between feeling and nothing. No story, no incident, no issue, no statement; just paint and hessian between you, me and nothing.' Brian Blanchflower.

Brian Blanchflower is one of western Australia's foremost contemporary artists. Throughout his career he has been interested by the relationship between humanity and the broader cosmos.

When Blanchflower emigrated to Australia with his family in 1972, his experience of being in the desert and seeing the starry night sky through a hessian canopy shelter inspired one of his most important series of works - the Canopy series.

He has commented on this series:

'Soon after returning to Perth following a residency at the Australia Council AIR and SPACE studio in London, I rented a large studio space, a former billiard hall, in Maylands. It was here that I made several free-hanging paintings which I called Canopies.

Each has a concern with cosmology. Part of the story behind these Canopy works is my experience of looking up at the starry night sky through an open-weave hessian sunshade.

The sky has been even more important to me than the land, although I was very keen on this marriage of the two. This came mainly from space exploration seeing photos of the earth from space and marrying those with views of the sky as seen from the earth.

It was in coming to Australia that this had its full impact. The contrast of light and dark, pinpoint brilliance to diffuse cloud, was often used by visionary romantic painters, especially Turner, to suggest that the cosmos had a moral structure.'

Blanchflower employs a similar structure. Such associations were always more than mere symbolism. They suggested a determinate link between the human and the infinite, embedded in the very material of the universe. David Bromfield, Brian Blanchflower: Glimpses, Heytesbury Pty Ltd, Perth 2001