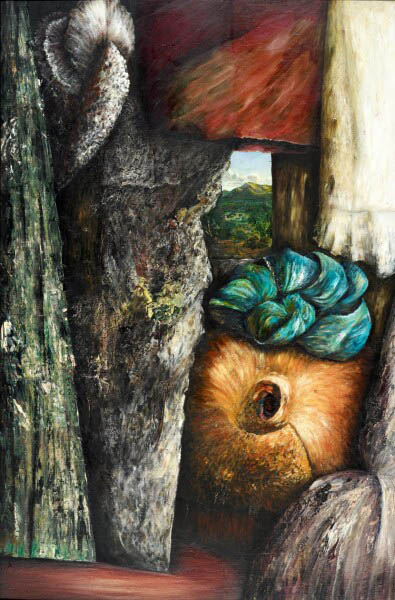 From her series of paintings from 1982-84, commonly referred to as the Lavished Living series, the title is a pun on the middle-class preoccupation with the ever-popular magazine, Vogue Living.

Norrie's inspirations for this painting series drew from her research on the Australian landscape tradition, 19th century botanical drawings and the private sketchbooks of colonial women.

An examination of the role of women in colonial society and the issues migrants endured over the land, are concerns debated in Norrie's work from this time to her most recent video work.

In the Lavished Living series she presents her own interventionist history - one which questions the presence of the female domain in the Australian colonial landscape. A contradiction of the paradigms of history and tradition permit Norrie to create her own narrative of colonialism where femininity has entered the realm of the masculine.

A rich, fertile and imagined land challenges assumptions of truth, history and cultural memory allowing the viewer to question the construction of their own cultural narrative.

Her direct reference to history is a tongue-in-cheek appropriation of Eugene von Guerard's romantic vision. His Mt William from Mt Dryden, 1857 is consumed by her voluptuous archaic ruins.

Thick, heavy paint enables monumental and opulent motifs reminiscent of Georgia O'Keefe to seduce the viewer into believing that history can be redeemed, that fiction is truth and that truth is inconclusive. Norrie presents some complex and serious issues in a beautiful, lustrous and harmonious image.