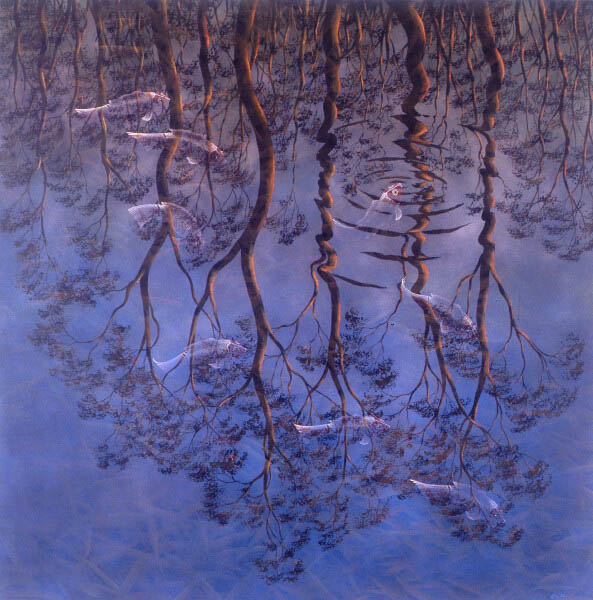 'I kind of hope that history may see me as some sort of bridge between cultures, between technology and ideas.' Lin Onus,1990

Yorta Yorta artist and Aboriginal rights activist Lin Onus is widely acknowledged as a pioneer of the Aboriginal art movement in urban Australia.

Early in life Onus worked as a mechanic and spraypainter and later managed his father's boomerang workshop in Melbourne. It was in his father's shop that he discovered a set of watercolours and with these, made his first painting in 1974. A year later he held his first exhibition.

Onus's evolution as an artist was rapid and in 1986 he became profoundly influenced by a visit to Maningrida in Arnhem Land in the Nrthern Territory, where he began a long association with leading central Arnhem Land artists, including John Bulunbulun and Djiwul 'Jack' Wunuwun. His work from this point forward combines Western painting styles and techniques with traditional indigenous motifs, imagery and mythology.

In Fish and Reflections 2, the landscape is reflected on the water, whilst fish depicted in the style of the rarrk painting of Arnhem Land can be seen moving about under the surface.

The symbolic and cultural richness of Onus's work - incorporating photorealism with indigenous imagery - is all the more compelling for the meticulous technique he brought to the craft of painting.