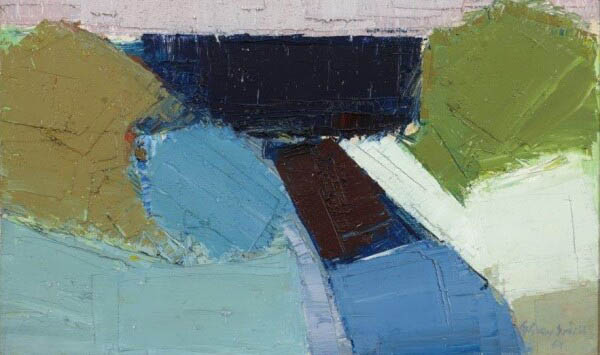 View to the sea, Quinns

'In the months following their return from Ceylon, Guy finally finished work on the beach house at Quinns Rock, having bought the block of land some years earlier. Nestled between two stabilised dunes about 200 metres from the beach, Guy had built it slowly by hand, hewing the massive limestone blocks with an axe. It featured a main room with bunks for seating (easily transformed into beds for overnight guests), small alcoves in the walls for lamps and books, and a separate room for Guy and Helen. An all-important wine cellar was installed and Guy then completed a large fresco based on wildflowers in the roofed (though unenclosed) carport.

Quinns was to become a favourite entertaining and escape zone for the family and their friends, but as Ted Snell points out, it was more than a holiday house for 'it is important for artists to have different environments in which to paint.' One of the first known paintings of the locale is View to the Sea (Quinns), which shows the road leading from the house, up through the last dunes and on to the sea. Composed of a purple-blush band for sky and a mere ten blocks of scraped colour to demarcate the land, the pristine austerity of this view was not to last for long. Good friends Harold and Rose Toussaint later built an A-frame 'alpine' lodge a short distance away where they would entertain visitors such as Brett Whiteley, Charles Blackman, John Dankworth and Cleo Laine, and other new houses soon followed. This was still some years off but for now, in 1964, it was still the outer limits of Perth coastal living and View to the sea (Quinns) perfectly captures the possibilities of that wild and rangy atmosphere.

Guy Grey-Smith’s paintings of the 1960s are renowned for their elemental and emphatic abstraction. Slabs of paint are trowelled on to bring about a forceful distillation of the scene. The philosopher and art critic Patrick Hutchins described it as: painting as kinaesthetics, a diagram of the colour forces.”[1]

Here, the scene is the Indian Ocean through the sand dunes at Quinns Rock, north of Perth. In 1963, the artist built a stone house near the beach, and this is his first known painting of that place. The central slabs of blue and deep brown show the road from the house to the shore, and the picture is anchored by the inky blue horizontal rectangle of the deep ocean beyond. It is an image of tremendous power, evoking the blinding light of the coastal sun and a sense of wild openness beyond the city’s edge.

Comparisons with the Russian painter Nicolas de Staelare common in discussions of Grey-Smith’s 1960s output. There is an obvious synergy with de Staël’s zones of colour and thick blocks of paint, and Grey-Smith acknowledged the influence.  Patrick McCaughey, then art critic for the Melbourne Age, wrote in 1966:

If Guy Grey-Smith finds the things he wants to say in another man’s style, it does not necessarily negate the validity of his convictions. In the best pieces … Grey-Smith confronts the same dilemma and presents the same solutions as de Staël: how does one reconcile the modelled image and the flat surface of the painting?[2]