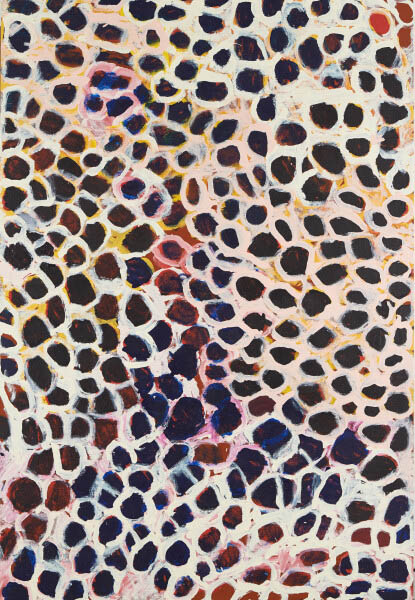 'These are lots of young girls doing milpatjunanyi, the traditional way of telling stories in the sand. These circles are their bottoms in the sand. They are all sitting around talking about men. They are talking with their hands, talking about men, maybe they like a man, maybe they want to get married. This story is from near Walytatjara, north of Kalka. There is a big red hill there. It is called Kungka Malu'. Harry Tjutjuna 2013

Tjutjuna was born circa 1930 at Walytjatjara north east of Pipalyatjara, near the tri-state border of South Australia, Northern Territory and Western Australia. He is a Pitjantjara speaking Ngankari, traditional healer and senior law man.
The artist's country is near Mt Davies in the north-west corner of South Australia close to the Western Australia and Northern Territory borders. He came in to Ernabella as a young man and was educated at the Ernabella mission school.

As a young man he took an active part in the life of the newly-settled community, working on bore sinking, fencing, gardening, and with the sheep.

Later he moved back to the far north-west with his family, living mostly in and around Wingellina in Western Australia, and Pipalyatjara on the Anangu Pitjantjatjara Yankunytjatjara Lands.
Tjutjuna began painting in 2005 at Ernabella before moving to Pipalyatjara in 2008 where he paints at Ninuku. He paints favourite dreamtime stories including Wati Wanka: Spider man; Wati Nyiru, the man who chases the seven sisters; Wati Malu and the Kungka Mingakri's, the kangaroo man and the female mice. He also paints Kunka Tjuta, young girls doing milpatjunanyi, the traditional way of telling stories in the sand.