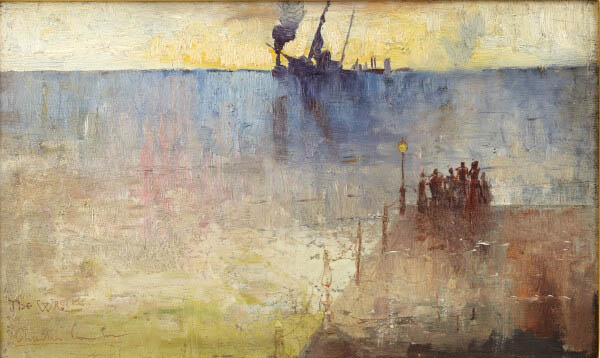 Charles Conder's dramatic oil study The wreck was based on an actual collision that occurred in Hobson's Bay, at the Powder anchorage off Cape Gellibrand on 23 June 1889, between the masted Cape Verde and the ironclad Iolanthe. Its striking high horizon line was a convention often used by 19th century marine artists in order to maximize the area available for painting ships.

Conder has dramatically inverted this naval convention. Here the sea is left an empty space and only the distant silhouettes of two ships can be seen on the horizon line, witnessed by a group of horrified bystanders clustered on the edge of an otherwise empty pier in the foreground.

Conder's oil defies classification. Not known to have been exhibited during his lifetime, The wreck seems to have been painted on a whim. Ultimately stemming from the black and white work he produced for the illustrated press in Sydney and, intermittently, in Melbourne, it reveals his love of incident. For he did not actually witness the sensational collision which occurred in Hobson's Bay. But he did see its aftermath when he went to collect his cousin Maggie and her parents from the P&O liner RMS Carthage berthed at the busy Station Pier, Port Melbourne. They had embarked in Sydney and were making a brief visit to Melbourne before continuing on to Bombay.

Conder had been in Melbourne since October 1888. By now he was well established, sharing a studio in town in winter and painting en plein air at Heidelberg in the summer months with new friends Tom Roberts and Arthur Streeton.

The vividness of the spectacular sunset suggests that this was something the artist had witnessed. And although he may have paid little attention to the actual physical facts of the disaster, in his handling of light and colour Conder shows a rare sensitivity to place and meteorological conditions. The collision had occurred at dusk in stormy conditions two days after the winter solstice. The sun was now at its lowest altitude above the horizon. Due to Melbourne's latitudinal proximity to the South Pole winter lighting effects there, especially at sunset, can be quite unusual. Deploying a rich palette of golden yellows, ultramarines and a dusky pink offset by the dark umbers of the two ships and the pier, Conder has made the sunset as much an event as the actual collision.

Silhouetted against a golden afterglow the menacing, steam-puffing ironclad has already struck the hapless Cape Verde. She is pictured breaking up, sails unfurling, her stern already beneath the water. The stricken and the aggressor are seemingly alone on the horizon line with just a few strokes suggesting there might be other vessels Â– a tug perhaps? at a distance. But here Conder is taking a total artistic liberty: at the time Hobson's Bay was crowded with moored ships and this was, indeed, the reason for the collision.

As the viewer looks up towards the collision, so too do a group of concerned figures on the edge of an otherwise deserted pier. This too is highly unlikely given that this was Station Pier, Melbourne's only passenger terminal since its opening in September 1854, and would normally have been crowded with berthed ships and busy attendants.

It is late in the day and the gas lamp has already been lit. The anguish of the small group of witnesses is suggested by their tight grouping and raised arms. A slightly supernatural white light flashes across the vast empty spaces of the sea and pier setting a mood of tragedy. Conder adds to this by bleeding ultramarine and touches of burnt sienna down the picture plane beneath the boats, implying a watery grave for the stricken Cape Verde. Burnt umber darkens the bottom edge of the pier adding a further downward impulsion. Conder uses colour to hold in tension the viewer's desire to read the scene in an upward direction and the descending darker areas of paint that convey the underlying meaning of the painting.

Delicately painted with a limited palette on a wooden panel - the surface of choice for both Conder and Streeton at this time - The wreck is a masterly study of high drama cleverly worked with minimal means.