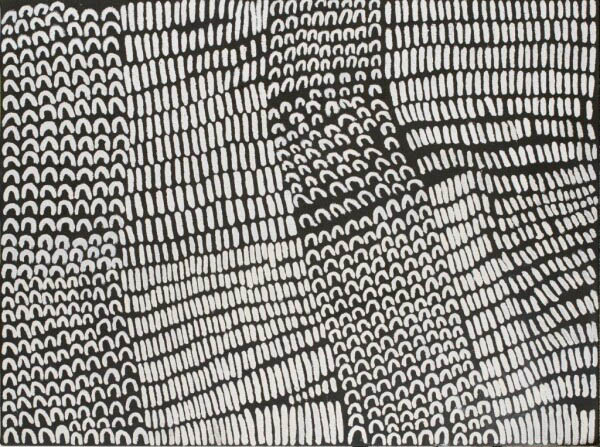 One of Australia's foremost indigenous artists, Lena Nyadbi came to world attention with her commission for the roof design of the Musee du quai Branly, in Paris, in 2013.

Nyadbi has painted at Warmun Art Centre since 1998. She paints two principal Dreamings; Jimbirla and Dayiwul Lirlmim. Jimbirla are the sharp quartz-like stones used in the past by Gija people to make spear tips. Dayiwul Lirlmim are the scales that scraped off the Ngarranggarni (Dreaming) barramundi as she jumped through a range of hills escaping from the women who were trying to catch her.

In the Ngarranggarni (dreaming), three Gija women were fishing for Dayiwul the Barramundi with a trap made of nyiyirriny (spinifex grass). The women chased Dayiwul up the river to shallow water, but he was smarter and he escaped by leaping over their spinifex grass trap and through the gap in the mountain range. When Dayiwul landed, his lirlmim (scales) were scattered all over the ground. They turned into the diamonds. Dayiwul needed to find deep water. He swam down into Cattle Creek and followed that water all the way down into the Ord River, right into Kununurra where he found the deep water. Dayiwul Lirlmim Ngarranggarni is in Lena's mother's father's country, Thilthuwam, now known as Lissadell Station.

The vertical strokes in Nyadbi's work representjimbir/a(spearheads). Jimbirla (Spearhead) country is Nyadbi's father's traditional land. It lies north of Warmun, towards Doon Doon Station. The ground is littered with extremel  hard, sharp stones. Gija  people used to wrap their feet in paper bark or calico when hunting kangaroos in the hills, to stop the stones from cutting their feet.

Jimbirla (spearheads) were traditionally made of this rock and later  of  glass. Jimbirla are attached  to  garlumbu  (spear  shafts) using spinifex  resin  and  kangaroo sinew.  Nyadbi says that in this country, you can find the many different  coloured  stones that were used to  makejimbir/a. In the early days people used to break them  with  a strong stick, to  make the  spearhead  sharp.   The whit semi-circular shapes represent Dayiwul Ngarranggarni  - Barramundi  Dreaming. 'Ger/gayi ngalim wumberrayin warnawarnarram. [long ago, the women were fishing with a spinifex net]. Get 'im, gundarri [fish], chuck 'im la top, ger/gayi[netting them] all the way right up to that place, chuck 'im [fish] /abank all the way. They bin get la top place and they bin put 'im there.

Leave that nyiyirriny [spinifex) there, poor bugger. They bin leave 'im [the net] there, he bin turn into stone.' Three women trying to trap Dayiwul the great barram undi with spinifex nets. This is a traditional method of fishing wherebynyiyirriny (river spinifex) is rolled and placed in the water forming a kind of net. Dayiwul was too clever for the women and jumped over the barrier they had laid.

She pushed her body through the rock of what is now called called  Pitt Range. The women gave up and walked to a place called  Gawinyji (Cattle Creek) where they turned  into rocks. The scales of Oayiwul embedded  in the rock, became the  diamonds that are extracted from the Argyle Diamond Mine.