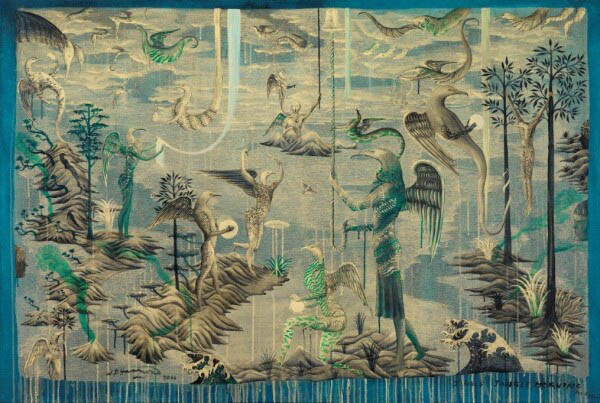 Taken from a verse in Bob Dylan's song Mr Tambourine Man, Jingle Jangle Morning is the title of an opulent Bill Hammond painting depicting majestic avian musicians and serpentine creatures who sing, dance and play instruments upon a floating world of golden clouds and mountainous divides.

Bill Hammond is one of New Zealand's most influential contemporary artists. He was born in Christchurch in 1947 and attended the University of Canterbury School of Fine Arts. During the 1970s, he worked in a sign factory, made jewellery and designed and manufactured wooden toys before returning fulltime to painting in 1981.

Birds first began to populate Hammond's paintings after he visited the Auckland Islands in 1989, as part of the Art in the Subantarctic project. The three-week trip to the remote, windswept islands, where the severity of the climate has allowed little human impact on the natural environment was something of a revelation. In an interview with Gregory O'Brien for Lands and Deeds (Godwit, Auckland, 1996), Hammond spoke of the islands as a kind of lost world, ruled over by beak and claw: 'The Auckland Islands are like New Zealand before people got here. It's bird land.'