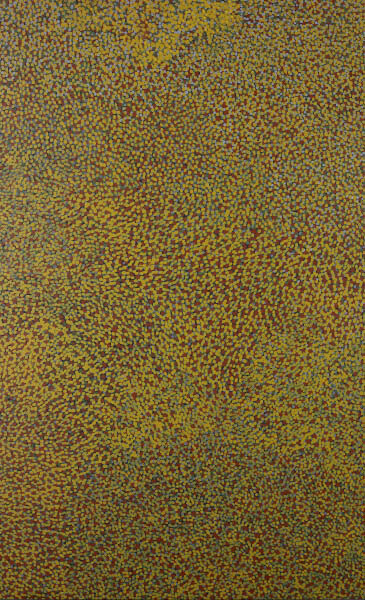 Mick Namarari Tjapalatjarri was one of the pioneer group of painters at Papunya in the early 1970s.

Namarari was a custodian of a constellation of sites in the vicinity of the Western Australian/Northern Territory border, several of which were associated with totemic mammals. As a result there has been some confusion regarding the identity of species associated with particular works, for example, Tjunginpa is both the name of a hopping-mouse and a totemic site, northwest of Kintore, associated with the species. The behavior of the mouse sheds some light on the treatment of Namarari’s paintings and the religious significance of this seemingly minor mammal.

Tjunginpa live in cool burrows under the sunbaked desert earth. Tunnels connect their burrows, in much the same way as paths in classical Tingari paintings interconnect sacred sites. In times of abundance, following heavy rain, plagues of Tjunginpa emerge from popholes, dotting the sand between favoured food plants with tiny tracks.4 These trackways are reflected in the treatment of Namarari’s paintings. The emergence of the hopping-mice from their burrows reinforces the Indigenous notion that all life comes from the earth. Moreover, the abundance of Tjunginpa streaming from their popholes substantiates a belief that if the correct ceremonies are conducted, animals and plants will flourish.

Namarari’s luminous late work Tjunginpa, 1997 is a profound meditation on the cryptic, yet distinctive attributes of particular desert species. Such paintings transport us from the gallery and into a world of minute observation and precious knowledge.