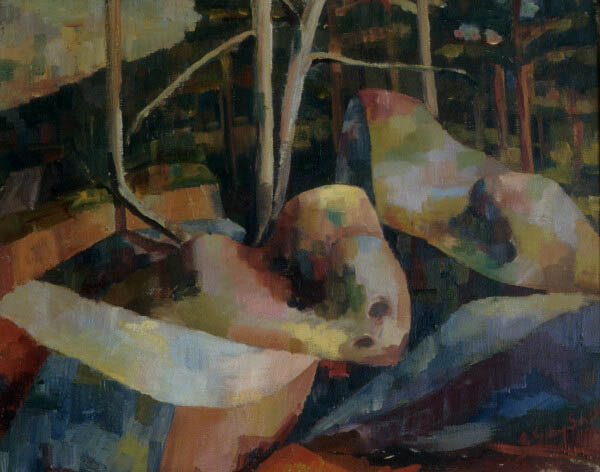 Guy Grey-Smith was flying a Bristol Blenheim for the RAF when he was shot down over Europe in May, 1940. After four years as a prisoner-of war, and suffering from tuberculosis, he was transferred to England. Art therapy was among the treatments during a year’s slow recovery at a sanatorium, which was followed by studies at the Chelsea School of Art.  It was a formative period, as Grey-Smith learnt from and engaged with British modernists. Inspired by Cézanne and the Fauves, the modern artists had moved beyond traditional narrative and realistic depiction, and embraced colour, mass and pattern.

Before returning home to Western Australia in 1947,  Grey-Smith travelled to France and visited the forest of Fontainebleau, on the outskirts of Paris. Cézanne had depicted similar scenes at Fontainebleau in the 1890s. This painting, which carries the same title as a Cézanne work, suggests Grey-Smith was familiar with the French master’s Fontainebleau paintings.

Pinks, blues, oranges, greens and yellows dapple the picture, as the monumental rocks in the foreground catch the light through the trees. This early work was shown in 1949 in Perth, at the artist’s first solo exhibition. It is an image of some delicacy, and can be seen as a precursor to the more emphatic blocks of colour that would emerge during his deep and lifelong engagement with landscape.

The artist was born in the wheatbelt town of Wagin. When he was a child, the family moved to Paynes Find in the mid-west, then to south-west forest country by the Blackwood River at Boyup Brook. The boulders and trees of Fontainebleau may well have resonated with Grey-Smith’s recollections of growing up in rural Western Australia.